Between Egypt And The Promised Land 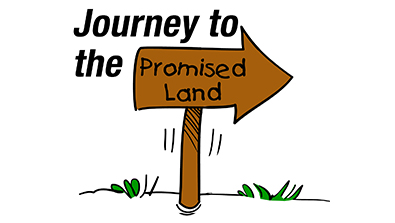 For some time now, Nigerians have been going through a lot of hardship occasioned by scarcity of refined petroleum products. Precious man hours are spent each day queuing up for fuel at the gas stations. The depreciating value of the Naira against major foreign currencies has crippled not a few businesses. Inflation is up and rising. Add also epileptic power supply nationwide and you have a frustrated and angry populace.

Between president Buhari and Nigerians, it is deja vu’. What we are up against today is not too different from what we faced between 1984 and 1985. Those were the days of “essential commodities” and Buhari’s first sojourn as head of state of Nigeria. It is either the man, Muhammadu Buhari, is a man of destiny or he is one helluva unlucky guy. By January 1, 1984 when the then General Muhammedu Buhari was announced as a military head of state, after the coup d’etat of December 31, 1983 that toppled the civilian government of Alhaji Shehu Shagari, Nigeria was at crossroads. The senseless looting (insignificant in retrospect) that characterized the National Party of Nigeria (NPN) government of Shehu Shagari had ground Nigeria to a halt. Nothing appeared to be working and the country was hanging precariously on a precipice. The soldiers came to the rescue and were welcomed with a generous amount of goodwill. Tough talking and stern looking, the duo of Muhammadu Buhari and Tunde Idiagbon, his deputy, set about restoring hope and discipline first in governance and among the populace. Depletion of our foreign reserve, depreciating value of the Naira, very high inflation and mass unemployment were among the enormous problems confronting the nation. General Buhari resisted calls by the World Bank, International Monetary Fund (IMF) and western donor nations for the devaluation of the Naira. Consistently, the duo preached that a simple reordering of our priorities, elimination of corruption and greater prudence on the part of the government was all that was needed to steady the ship. Many politicians suspected of corruption were thrown into jail. A lot of luxury items were banned for importation. Essential commodities were rationed at the supermarkets and local government headquarters across the nation.

Unfortunately, Nigerians were too addicted to opulence to go along with Buhari’s spartan prescription. They cried, they shouted and before we knew it, General Ibrahim Badamosi Babangida strove in to “save” us from Buhari/Idiagbon. We danced on the streets with jubilation. Not long after, all banned items were unbanned. The Naira was heavily devalued under the structural adjustment program (SAP) and again, corruption attained new heights and definition. The eight years of Babangida, the kleptocratic years of General Sani Abacha and the sixteen years of of democratic rule starting from 1999 has been aptly described as the years of the locust. They were years of squandermania and missed opportunities which has taken us back to where we were in 1984 plus the burden of terrorism.

Again, along comes President Muhammadu Buhari in 2015, this time as a civilian president without the bespectacled General Idiagbon of blessed memory. And one could not but wonder if this second coming is fate or chance. A blessing or curse? Not often is a man given such second chance in life especially when it is noted that it took him four attempts to finally win the presidency.

Like in 1984, these measures, as laudable as they may be, do not enjoy universal approval among the populace. A large section of the people have found some of these pills quite unpalatable and are resisting same. Being a democracy as opposed to the dictatorship of 1984, it has not been easy for the government to force these pills down the throat of the entire citizenry.

There is a general belief that had Babangida and company not struck in 1985, Generals Buhari and Idiagbon could have rid the country of corruption and led us to sustainable prosperity.

Following the coup d’etat, resultant and successor governments perfected the art of corruption and elevated it to a national heritage. In the face of the prevailing hardship in the land occasioned by the economic restructuring taking place today, the question is, do we go back to Egypt? Or do we continue on the difficult and painful path to the promised land? The harsh reality is that we really have no choice in the matter. We either march on to the promised land regardless of the associated pains or we perish as a nation. These pains are temporary. It is better we suffer the pains now and enjoy forever after. Certainly, there are opportunities in these challenges. The challenging economic situation can act as catalyst for a real and sustainable growth in the future. We must undertake and complete this painful and arduous journey of economic rebirth. The mistake of 1985 must never be allowed to repeat itself.