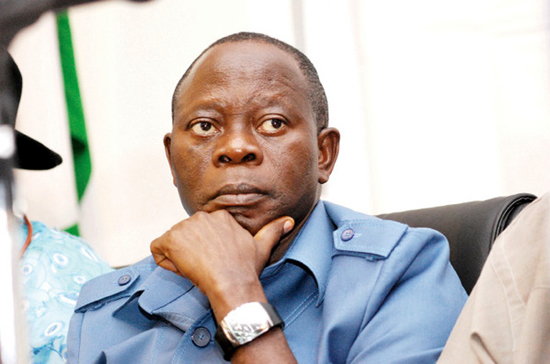 By November, Adams Oshiomhole would have completed his second term as governor of Edo state. Love or hate him, his tenure has been remarkable. For almost eight years, the comrade governor has held us spellbound with his struggles, triumphs and foibles. His combative and outspoken nature has earned him equal amount of criticism and condemnation. He however remains largely popular among the people of Edo state and beyond.

His journey to the Edo state government house was strewn with thorns. By 2007, governor Lucky Igbinedion of the Peoples Democratic Party (PDP) had been in office for the maximum eight years allowed by the Nigerian constitution. It is notoriously near impossible to dislodge a governing party. That was the arduos task that Adams Oshiomhole and his party, Action Congress (AC) faced. After the 2007 gubernatorial election, his opponent of the PDP, Professor Oserheimen Osunbor, was declared winner by the Independent Electoral Commission (INEC) and sworn in as governor. Adams Oshiomhole had to battle through the Elections Petitions Tribunal and the Federal Court of Appeal before he was finally declared by the court on November 11, 2008 as the true winner in the election. He was subsequently sworn in as governor.

Since assumption of office on November 12,2008 and up until now,Adams Aliyu Oshiomhole has had to fight numerous battles, both as a governor and as a person. In governing Edo state, once thought of as just a civil service state, the governor was confronted with a horde of problems. There was infrastructural decay, a failing educational system, intractable problem of flooding and traffic bottlenecks in the state capital, a disinterested populace and above all, little or no internally generated revenue (IGR). History and historians will judge his administration on how well he tackled these problems. On the issue of state revenue, there is no doubt that the governor has placed Edo state on the list of states with most improved IGR. He has been able to raise the state’s monthly IGR from a meagre #285 million to #2 billion. Internally generated revenue now constitutes fifty-four percent of state revenue. This is, without doubt, a no mean achievement in a state not noted for commercial and industrial activities. The governor claims to have unashamedly copied most of his revenue generating schemes from the Raji Fashola administration of Lagos state (2007-2015). Such measures like the Land Use Charge and Consumption Tax has pitted the government against the high and mighty in the state. The governor has however weathered the storm to wean the state of dependence on federal allocation. Today, while many states in the country are owing upwards of three months salary arrears to their workers, Edo state is not indebted but has recently increased minimum wage for its workers. Another evident accomplishment of Adams Oshiomhole can be found in the area of road construction and urban renewal. Under Oshiomhole, the government finally came to the realisation that the twin issues of flooding control and road construction cannot be treated one in isolation of the other. Having this in mind, the government embarked on massive road construction across all parts of the state incorporating surface and underground drainage system in all. The ever popular and busy Airport road in Benin city epitomises this approach. The one time two lane road that was often flooded, has since been reconstructed into a six lane road with six tributary roads all complete with surface and underground drainage that has effectively solved the intractable flooding and traffic jams previously associated with the area. More importantly, the governor’s determination to completely deal with incesant flooding in Benin city is anchored on the #30 billion Benin city Storm Water Master plan. Although there are encouraging reports of success in the areas covered so far by the scheme, the jury is out on whether successive administrations will have the political will to continue with it bearing in mind the enormous cost. In the educational sector, after verifying that a good percentage of the teachers under the Universal Basic

Education scheme were either not sufficiently qualified (like Mrs Augusta Odemwingie) or were too old, the governor instituted a retraining program for those not sufficiently trained while laying off those too old and unproductive. This was not without initial resistance by the National Union of Teachers (NUT). The subsequent recruitment of new teachers helped to molify the teachers union. Remarkable in the sector also is the physical rehabilitation of school buildings all over the state. It is estimated that fifty percent of all state schools benefitted from this. The rehabilitated schools are distinctively marked out by the popular red roofs so much so that parents and their wards now prefer the public schools to the private ones. Critics however contend that much more could have been done in eight years.

While the governor touts the now completed ultra modern Central Hospital in Benin city as the best referal hospital in Nigeria, opponents of the governor view it as a white elephant project contending that the billions spent on building and equipping it could have been used to provide improved primary healthcare services in all nooks and crannies of the state. However the critics view these projects, the people, particularly residents of the state capital, are happy with the comrade governor. No less a person than the now late oba of Benin, His Royal Majesty, Omo N’oba N’edo, uku akpolokpolo Erediauwa, in a rare public show of support to a government official, visited the government house on November 14, 2012. He eulogised the governor thus “You have done well. Keep the flag flying. You are a wonderful man”. Observers have since accused the governor of over compensating the Binis and Benin city in appreciation of the support of the powerful oba and his subjects. The governor did also win the Vanguard newspapers award as the governor of the year 2015. Were he to be an Igbo man, Adams Oshiomhole would surely be given a chieftaincy title by his community and probably be called “ogbuagu” (slayer of lions) for he has indeed killed many lions in his political career.

While some of the above projects may qualify as legacy projects, the governor will probably always be remembered (and lauded?) also for his public spats. Nigerians will not forget in a hurry the long running battle for supremacy between the governor and chief Anthony Anenih, the former chairman, Board of Trustees of the PDP, often called “Mr Fix” of Nigerian politics. Adams Oshiomhole is credited with loosening the tight hold that chief Anenih had in the politics of Edo state thereby defeating “godfatherism” in the politics of the state. However as the governor’s party, APC prepares to nominate a gubernatorial candidate for the September election and the governor’s succession plan unfolds, one wonders if we are not merely witnessing a change of guards as far as godfatherism in Edo politics is concerned. There also seems to be no end in sight in the governor’s open and vicious fight with the Igbinedions. Two time governor, Chief Lucky Igbinedion and his billionaire father, Chief Gabriel Igbinedion are said to have been driven into their shells by the ever combative Adams Oshiomhole who recovered 200,000 hectres of land allegedly allocated unlawfully by Lucky Igbinedion to his father while the former was governor. Igbinedion the son is also alleged to have defrauded the state in other sundry ways with the governor vowing to send him to prison for these alleged infractions. It has been alleged that the Igbinedions were behind the recent street demonstrations against the state’s land use charge in their bid to fight back. More recently, the governor’s tenuous attempt to link Dr Ngozi Okonjo-Iweala, former finance minister under the Goodluck Jonathan administration, to the $2.1billion arms scandal and the attendant war of words between the two has riveted the nation. While no one is in doubt about his sincerity of purpose, political analysts tend to think that some of the governor’s public outbursts are sometimes unnecessary. Leaving aside his politics for a moment, Adams Oshiomhole did score a big one in his personal life. His choice of Lara Forte as wife and first lady was a master stroke. Lara Fortes Oshiomhole has been described as a beautiful woman with a beautiful heart. Her dedication to the cause of the weak and vulnerable in the society has won her not a few hearts. Her “We Care Trust” recently raised a whopping #137million in aid of orphans, the elderly and the displaced in Edo state.

How many lions will a man slay before he is called a lion slayer? As the Oshiomholes prepare to bid good bye to the government house come November, it is certain we will hear and see more of this dimunitive dynamite and his  in the months and years ahead.