BETWEEN EGYPT AND THE PROMISE LAND 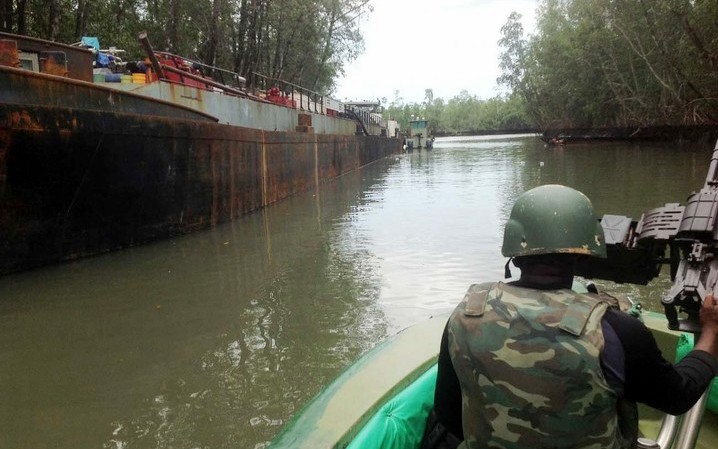 PIC 11. a vessel mv sea express laden with some 2,500 tones of crude impounded by joint task force in the niger delta, operation pulo shield at okuboto creek in bayelsa state. On Sunday (21/4/13)

Nigerians awoke on the morning of February 10, 2016 with news that a new militant group, the Niger Delta Avengers (NDA) had attacked the Bonny Soku Gas Export Line with threat of further attacks unless certain conditions are met by the Federal Government of Nigeria. Considering that the Niger Delta had enjoyed relative peace following the amnesty program instituted in 2009 by the administration of the late President Umaru Yar’Adua, Nigerians were shocked and dismayed. In quick succession, several other oil and gas infrastructure across the Niger Delta were attacked and vandalized with the NDA claiming responsibility. Other militant groups with all manner of names and demands, have since joined the fray, all vowing to ground all oil and gas business, and by extension, the economy to a halt unless their demands are met.

The emergence of the Niger Delta Avengers coincided with the Economic and Financial Crimes Commission (EFCC) instituting criminal charges against Chief Government Ekpemupolo (alias Tompolo), a former commander in the Movement for the Emancipation of the Niger Delta (MEND) and the police declaring him wanted. Chief Ekpemupolo was a known beneficiary of the amnesty programme and a supporter of the opposition Peoples Democratic Party and former president Goodluck Jonathan. Incidentally, his name has featured and continues to feature prominently in any discussion of the renewed militancy. Under the government of Goodluck Jonathan, Tompolo was awarded a contract to protect oil and gas pipelines in the Niger Delta, the same pipelines that his militant group had previously targeted for destruction before the amnesty program. He became an instant billionaire. This lucrative contract was not only cancelled by the Muhammad Buhari administration, the Ijaw chief was also investigated and charged to court for fraud and money laundry. Tompolo has since gone into hiding and failed to attend court for his trial. Although the faceless NDA has frequently denied any connection with Tompolo, and in fact engaged in war of words with him, many still believe that the Niger Delta avengers is Tompolo’s answer to the EFCC. Every effort by the police and the military to trace and arrest chief Ekpemupolo has so far failed.

The renewed insurgency in the Niger Delta has cost Nigeria dearly. Between May and June 2016, Nigeria’s daily oil output slid from a projected 2.2 million barrels to as low as 1.4 million barrels due to shut flow stations and breached pipelines. Foreign investors are notoriously wary of investing in restive regions. Bearing in mind that there already exists a deficit of investment in oil and gas infrastructure in Nigeria, the real impact of the militancy becomes apparent.

Initially, the federal government was loath to dialogue with the NDA for obvious reasons. Firstly, dialogue with such a faceless group will be interpreted as a legitimization of terror and criminality and may encourage the emergence of similar groups. Also it may give an impression of weakness on the part of government. At the same time, government understands that relying solely on military action against the militants, even if viable, is not an advisable option. As a result, government has since indicated its willingness to enter into meaningful dialogue with the NDA and myriad other groups that have since sprung up. Dr Ibe Kachikwu, the Minister of State for Petroleum Resources and Chairman of the Nigerian National Petroleum Corporation (NNPC) has since assured that the government has commenced dialogue with the militants and in fact, has negotiated a 30 day cessation of hostilities by both sides. This is a good and welcome development. It is hoped that the talks will ultimately result in a return to normalcy in the Niger Delta region.

The return of militancy at this time however, raises more questions than it answers. One cannot help but ask if resource control and environmental degradation are really the issues here. Why are the different groups making purely political demands? For instance, it has been reported that the demands include the release from detention of Nnamdi Kanu of the Indigenous People of Biafra (IPOB) and Col. Sambo Dasuki, the National Security Adviser to former president Goodluck Jonathan. They are also reported to have demanded that all charges of corruption and money laundry preferred against Chief Government Ekpemupolo and other politicians from the Niger Delta region be immediately dropped. These demands and the pattern of destruction of oil facilities tend to suggest that the sole aim of the groups is the destabilization of the government of President Muhammadu Buhari and enjoys the support of some politicians of Niger Delta stock.

Whichever way one looks at the conflagration in the Niger Delta, it is clear that the angst that bred militancy in the first place continues to exist. The amnesty program, as commendable as it may have been at restoring calm then to the Niger Delta, has largely succeeded in minting a few billionaires while the vast majority remains poor, unemployed and frustrated. The foot soldiers of the billionaires are the ones receiving the N65, 000 monthly stipend. Those enrolled in training programmes at home and abroad graduate without jobs. Again, they have become willing tools in the hands of politicians and mischief makers. In other words, the struggle is not about sovereignty or pollution but about money, contracts and control. It is about who gets what contract, security or otherwise, in any oil and gas facility in their communities. While neglect and corruption by state actors led to the rise of militancy in the first place, compensation paid by oil and gas companies has often ended in the pockets of few individuals masquerading as community leaders. Tragically, even with government efforts at pacifying the people, only a few benefits to the exclusion of the vast majority of the traumatized populace. The government of Muhammadu Buhari must be commended for initiating a discussion with all stakeholders in the Niger Delta. It is to be hoped that this time around, a holistic and meaningful solution must be found to this orgy of violence and destruction. Even before this solution is reached, it will not hurt for the government to embark on some confidence building measures like aggressively carrying out the cleanup of Ogoni land and restoring the Nigerian Maritime University at Okerenkoko. The Niger Delta Development Commission (NDDC) must step up its interventions and affected state governments must begin to give due attention to the socio-economic needs of the oil producing communities and not leave it all to the Federal Government. Oil and gas companies also must be more transparent in their Corporate Social Responsibility interventions with a view to benefitting the wider community as against a few community leaders.

In conclusion, dialogue will always be preferred over and above military action to restore peace to the Niger Delta. Dialogue does not and should not stop the military from continuing to gather useful intelligence and strategising on how best to protect oil and gas facilities and deterring future attacks with minimum loss of lives. In addition, such dialogue must never compromise on the need for indicted corrupt politicians and businessmen to stand trials according to the laws of the land. No one should be seen to be above the law.